Cannabis: What You Need to Know

Cannabis, better known as marijuana, has long been the center of political debates, especially in Michigan. Starting back in 1967 when John Sinclair served two and a half years for possession of marijuana, the campaign for legalizing marijuana began shortly after Sinclair’s release. Sinclair’s campaign efforts were temporarily granted but reverted in 1972. Americans have long held the belief that marijuana should be illegal.

It seems the advocacy campaigns for legalizing marijuana in Michigan have come full circle. In 2018, the Coalition to Regulate Marijuana Like Alcohol gathered 360,000 signatures to petition the legalization of consumption, production, and distribution of recreational marijuana. A little over half of Michiganders now believe marijuana should be legalized and with the nation looking towards legalizing, Michigan has now begun the trek to legalizing cannabis. Public support for legalizing marijuana across the United States is at an all-time high.

At the beginning of November 2019, the Marijuana Regulatory Agency began accepting business license applications and approvals are expected to be sent by December 6, 2019. Below is a table that breaks down the penalties, fines, and incarceration periods for different cannabis offenses. 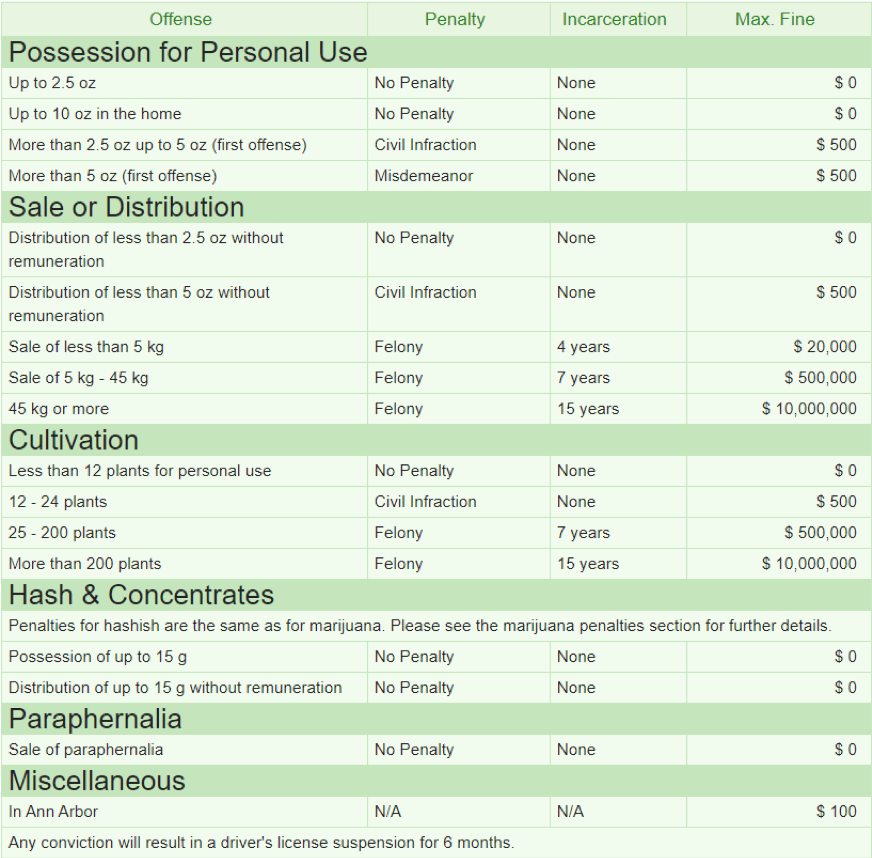 There’s a catch, though. Recreational marijuana use, production, and distribution still have restrictions. For example, nearly two-thirds of the state’s cities, townships, and villages have opted out of and prohibit recreational marijuana business. Ann Arbor, home to the University of Michigan, is a city that prohibits the use, possession, production, and distribution of marijuana. The University of Michigan also implements its own policies regarding marijuana use and possession.

As of March 2019, 33 states including Washington, D.C. have legalized and/or decriminalized medical marijuana. As of July 2019, only 11 states including Washington, D.C. have legalized recreational marijuana. Nine states have initiated legislation, with two approved by state legislatures. With Illinois passing a recent bill legalizing the possession and commercial sale of marijuana, it believed New York and New Jersey will follow.

In the workplace, Braska v. Challenge Mfg. Co.[1] determined that individuals possessing medical marijuana cards who are terminated for marijuana use are still eligible for unemployment compensation benefits due to their protection under the Michigan Medical Marijuana Act. In Barbuto v. Advantage Sales, the judge ruled in favor of a registered medical marijuana patient suing the employer for disability discrimination after termination due to failing a drug screening.[2]

There are still many bumps to be smoothed out in the use of marijuana in the workplace. For example, there is a heated debate about employer discrimination for turning away applicants who fail drug screenings due to marijuana use. However, studies have shown that many people who use cannabis responsibly are able to maintain their jobs.

Focus has been shifted to only testing for jobs that require an element of safety, such as operating machinery. For example, an HR manager of a manufacturing company discussed a scenario where a worker was injured while under the influence of marijuana.[3] However, in jobs that require merely the use of a computer are most likely under fewer safety risks than that of a manufacturing worker operating equipment.

Cannabis in the workplace can be a slippery slope for employers. If you’re not sure if your company policies are in compliance with state or local regulations, reach out to AccessPoint. We value your business’s success and understand how difficult it can be to remain compliant in an ever-evolving industry.